Writing Prompt #529: He would rather not see and turned his face away from them not wanting to know what came next.

‘No one will find us here.’

‘At least not after it rains.’ 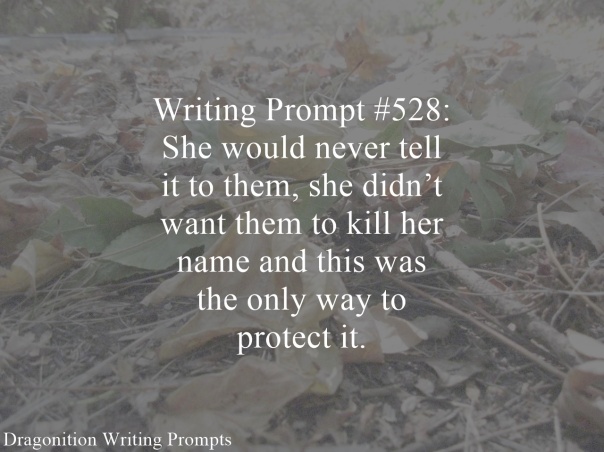 Writing Prompt #528: She would never tell it to them, she didn’t want them to kill her name and this was the only way to protect it.

Writing Prompt #527: She left him at just the right moment if she’d stayed with him she would have died with him. 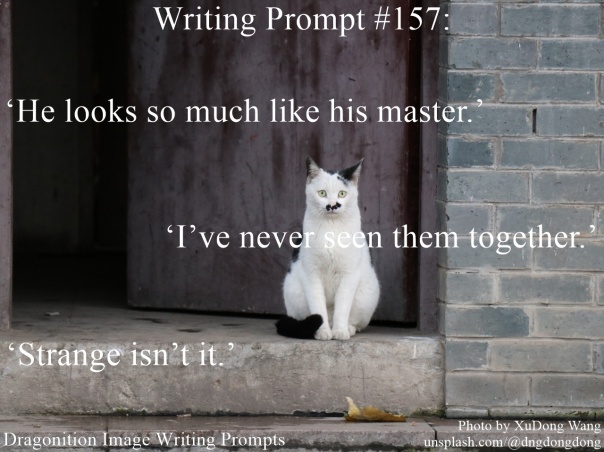 ‘I’ve never seen them together.’

Writing Prompt #526: It was only because they chose not to use him that night that he managed to get away.

Writing Prompt #525: She chose not to hide from him this time he always found her anyway. 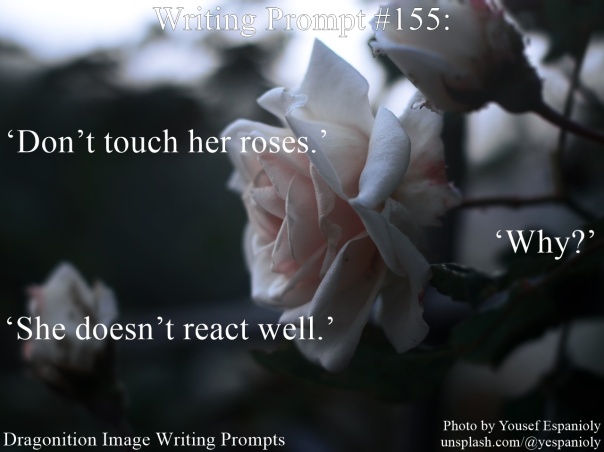 Writing Prompt #524: He was the only one who had the power to be the beasts master and now he was in an enchanted sleep. 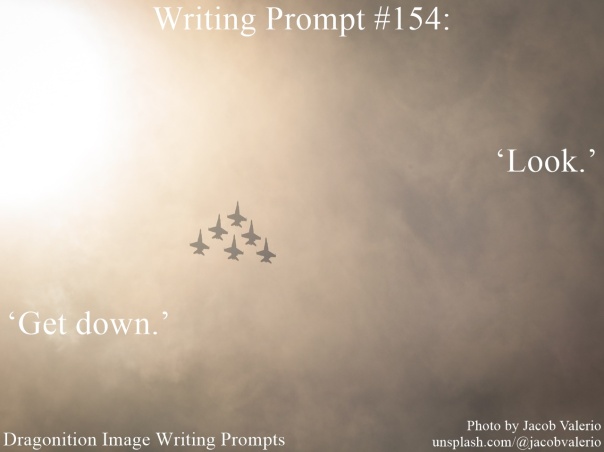 Writing Prompt #523: She only saw what they wanted her to see so all she saw where nightmares.

Writing Prompt #522: He knew she won the moment she stepped into the room the chains had made him too weak. 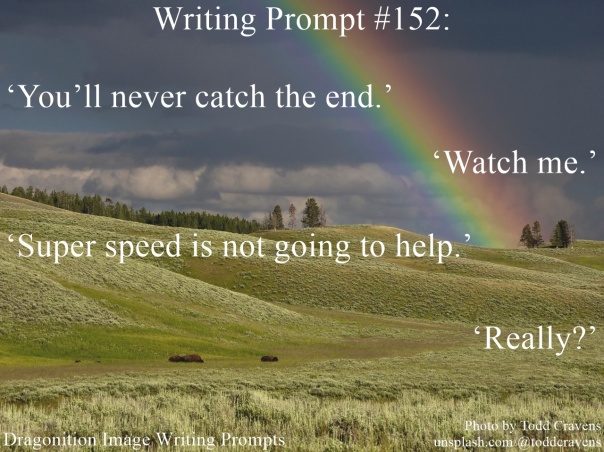 ‘Super speed is not going to help.’ 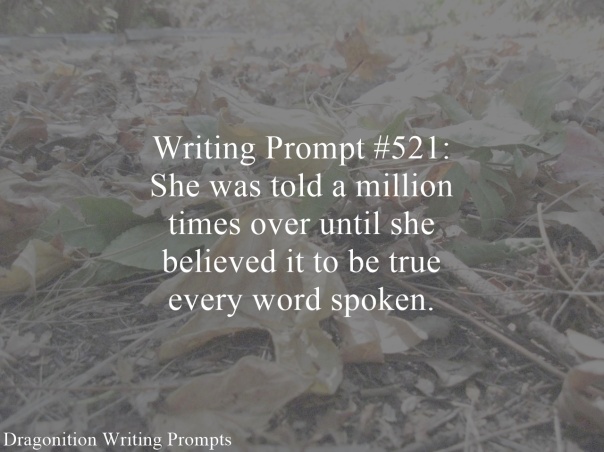 Writing Prompt #521: She was told a million times over until she believed it to be true every word spoken. 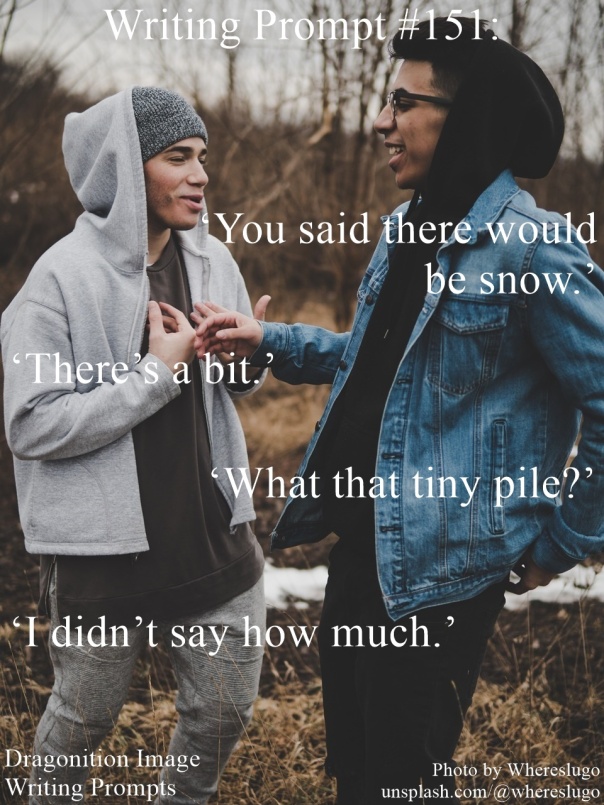 ‘You said there would be snow.’

‘What that tiny pile?’

Writing Prompt #520: He had to keep on trying not for himself but for the hundreds of people depending on him. 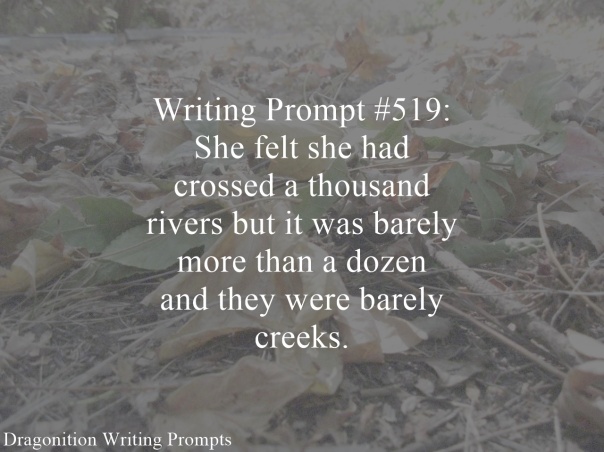 Writing Prompt #519: She felt she had crossed a thousand rivers but it was barely more than a dozen and they were barely creeks. 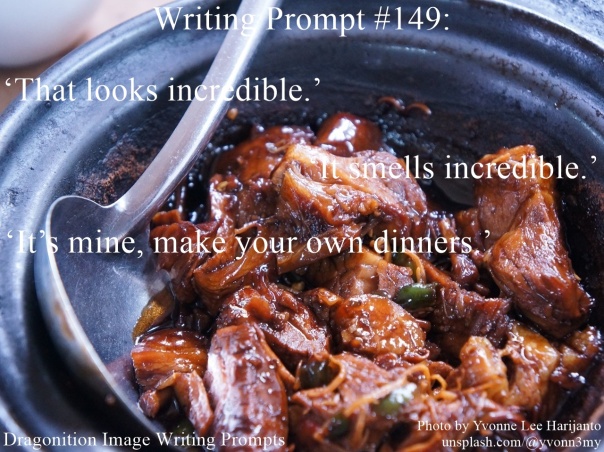 ‘It’s mine, make your own dinners.’

I love this story it is so adorable. I love the focalisation on the dogs so you get the feeling it is from their perspective.

“Just relax. You’ll be fine!” Penny called. She raced around the garage, her little legs scrambling with anxiety, faster and faster.

“I’m better than fine! This is amazing!” Oliver shouted back from near the ceiling, then careened into a stack of empty cardboard boxes. He bounced to the ground and looked stunned. Penny raced over and frantically nosed his face. Was he okay? Was he? Was he?

“Grr, Penny, get off! I’m fine. See?” He shook himself and grinned at her. His fur was sticking up on end and he had a packing peanut stuck to his head.

“This would happen while the humans are out, wouldn’t it?” Penny started pacing again, not as fast, but just as anxiously. Oliver sighed and scratched off the pesky peanut. “You had to go and eat that magic cheese. I told you not to! And look what happened!” She… 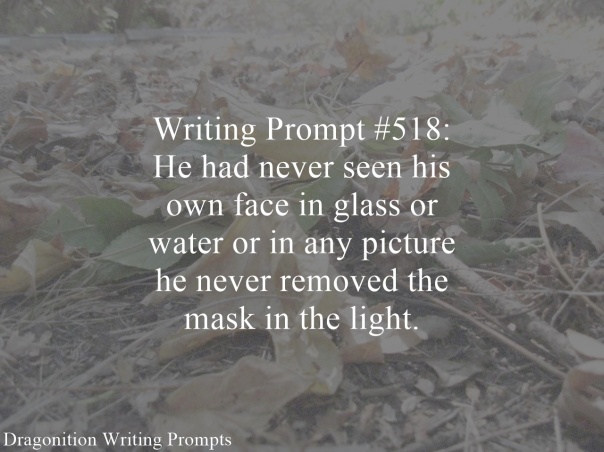 Writing Prompt #518: He had never seen his own face in glass or water or in any picture he never removed the mask in the light.

‘It’s much less pretty when you’re small enough to get caught in it.’

Writing Prompt #517:  She knew she must stay right where she was if she moved an inch the whole building would collapse.

‘Yeah so give her some space.’

Writing Prompt #516: He knew he would survive the fall he had every other time he jumped off the cliff dropped through empty air. 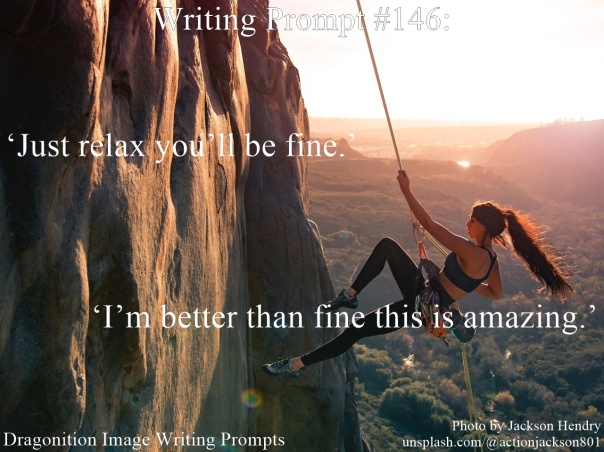 ‘I’m better than fine this is amazing.’ 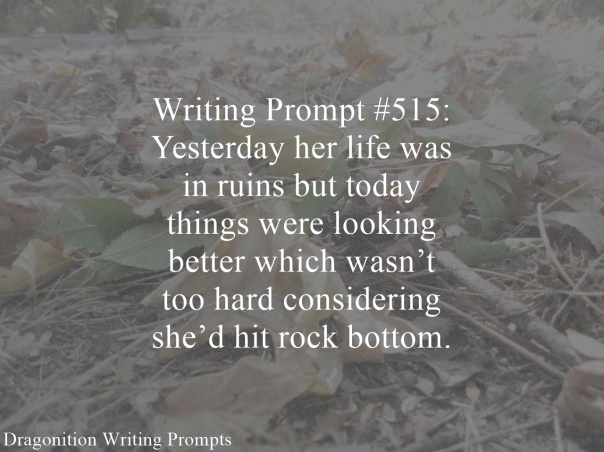 Writing Prompt #515: Yesterday her life was in ruins but today things were looking better which wasn’t too hard considering she’d hit rock bottom.

Writing Prompt #514: The dragon drifted around the castle like smoke, it was hard to tell where it ended and where the mist began.

‘Where is everyone? You said you had family here.’

‘I must have been gone longer than I thought.’

‘What happened to this place?’

Writing Prompt #513: The fever was so high it should have killed her but instead she started to warp into a new form. 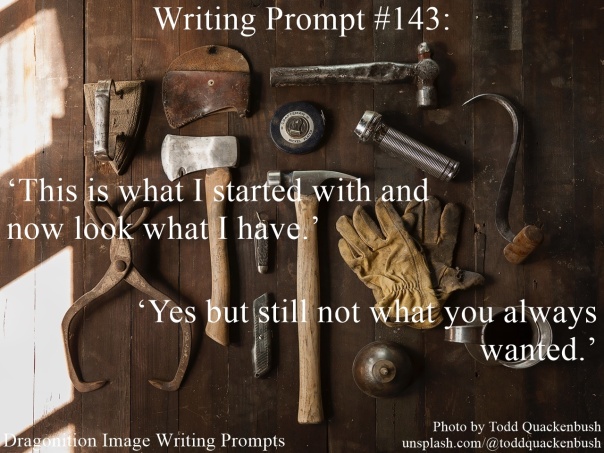 ‘This is what I started with and now look what I have.’

‘Yes but still not what you always wanted.’

Writing Prompt #512: He should have known better than to start hanging out with the witch. 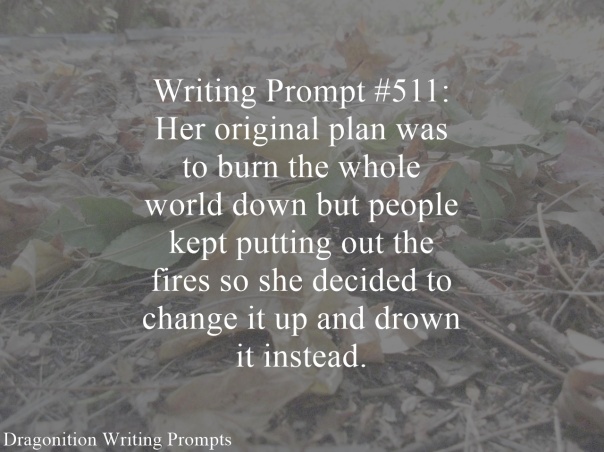 Writing Prompt #511: Her original plan was to burn the whole world down but people kept putting out the fires so she decided to change it up and drown it instead. 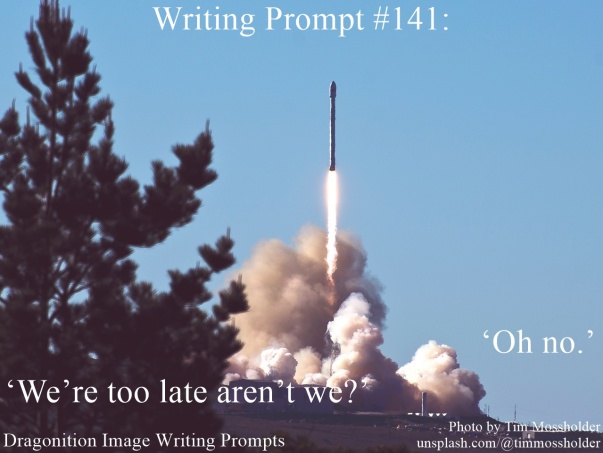 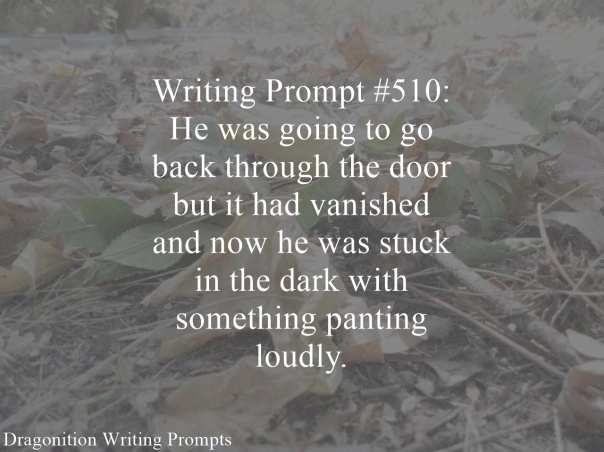 Writing Prompt #510: He was going to go back through the door but it had vanished and now he was stuck in the dark with something panting loudly.

‘Just back away slowly.’ 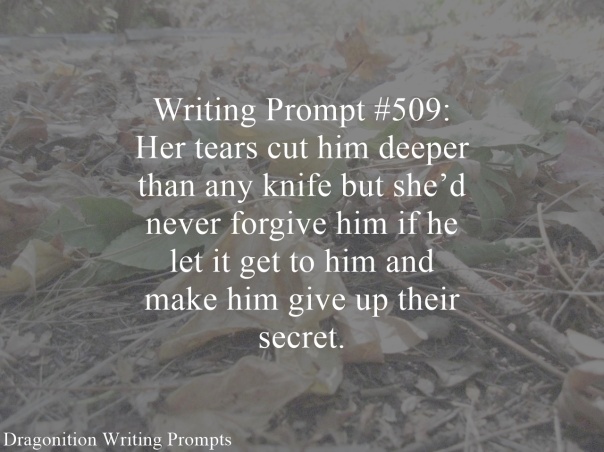 Writing Prompt #509: Her tears cut him deeper than any knife but she’d never forgive him if he let it get to him and make him give up their secret. 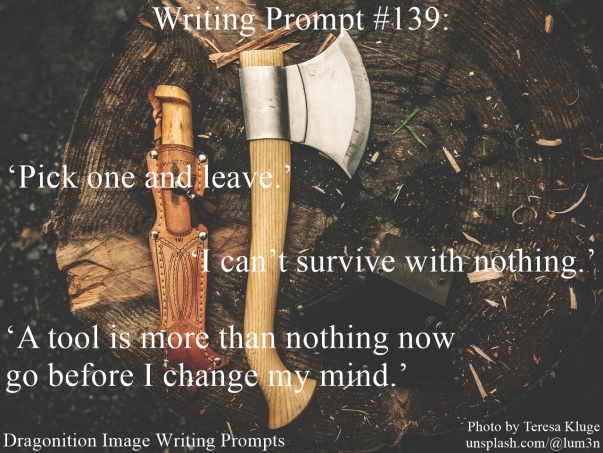 ‘Pick one and leave.’

‘I can’t survive with nothing.’

‘A tool is more than nothing now go before I change my mind.’

Writing Prompt #508: The monster howled after us as we ran along the tracks trying not to trip on rotting sleepers. 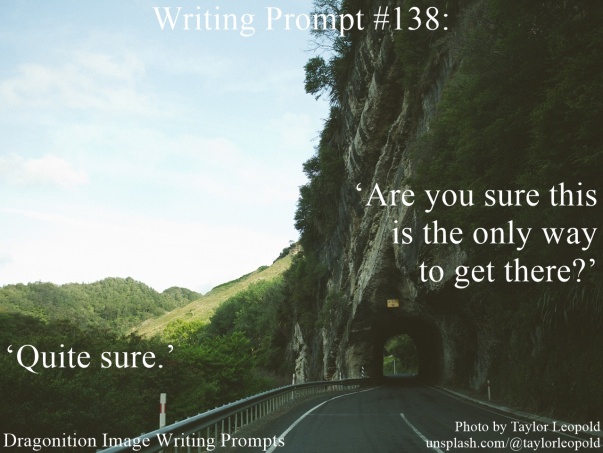 ‘Are you sure this is the only way to get there?’

Writing Prompt #507: He used his shirt to wipe away his tears so when they came back they wouldn’t see he’d been crying. 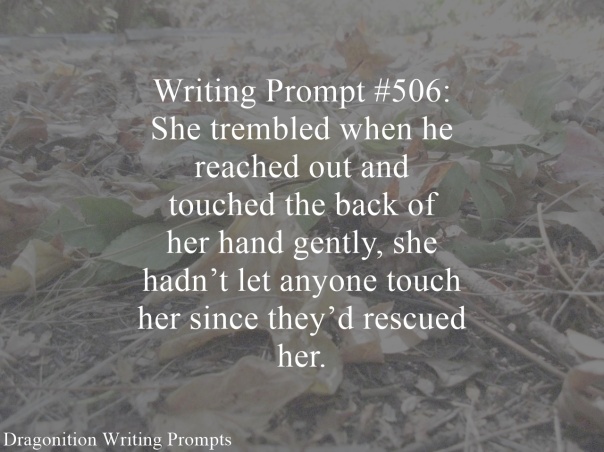 Writing Prompt #506: She trembled when he reached out and touched the back of her hand gently, she hadn’t let anyone touch her since they’d rescued her.

‘Show me your hands.’ 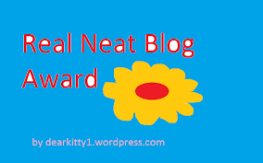